Its modular design and the resulting flexibility enable companies in retail to achieve their objectives when it comes to low-cost, reliable product transportation.

By combining standard, off-the-shelf modules with the flexibility to specify features such as belt width, belt type, drive locations and inclines, the Parcel Belt Conveyor provides a fast, easy and cost-effective transport system for transporting anything from packages to polybags. The standard modules for the drive, middle, transfer and end sections can also be used in combination with standard support and suspension structures, enabling the system to be either floor or ceiling-mounted. The modular structure speeds up the process of assembly, giving you a system that is sturdy, reliable and quiet in operation and requires only a minimum amount of spare parts.

The best belts for every requirement

The product can be installed with any incline up to 20°. The conveyor system can use either vulcanised belts or belts with mechanical connections. Belts have an anti-slip structure to prevent products from slipping on inclined sections. High static friction is a feature of the belts on the conveyor system.

Save power while transporting packages

Customer Support for the Fashion Industry

Competent engineering, fast and reliable on-site service as well as optimal spare parts supply round out our offering and ensure high reliability of the systems. 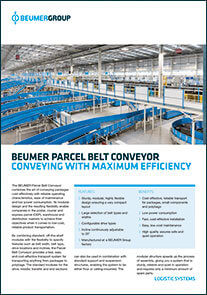